In Key West, the Party Goes On 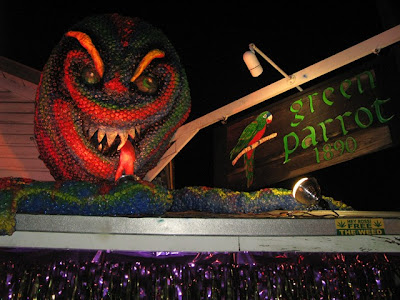 Given the events of October, it was an odd feeling to be in Key West during Fantasy Fest, which is the city's biggest street fair and festival with close to 100,000 people.  Fantasy Fest is the Mardi Gras of the Florida Keys. 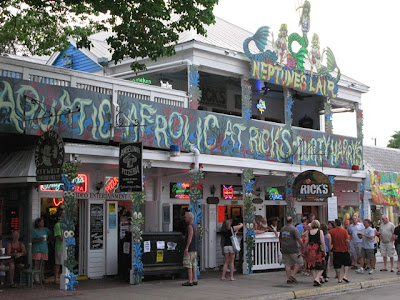 Fantasy Fest has changed a lot over the years, so we were both really charmed to hear a band playing in Sloppy Joe's that we first heard probably ten years ago.  Like most of Fantasy Fest, the lyrics of the song really don't fit the family-friendly format of our blog.  Still, some parents think Fantasy Fest is fun for the whole family and we see them and their strollers on Duval late at night. 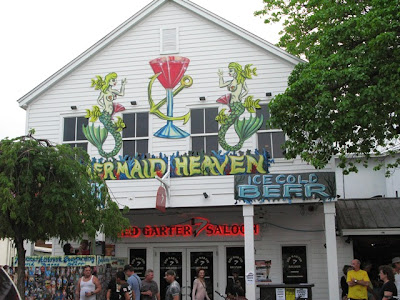 Fantasy Fest really revs up as the week goes on, capped off by the big night parade on Saturday.  Fantasy Fest used to be all about the beads, but now that Captain Morgan has become the main sponsor, body paint rules on Duval.  We joke about how the Fest has changed, how the streets are lined with grandparents freshly painted and worn out from their Harley ride down US 1, happy to be in the Fantasy Zone where they can walk around with an open container worry-free.

Locals break out the real costumes for the Mascarade March, basically a costumed beer crawl from the historic cemetery to downtown.  Our neighbor has led one of the two routes for several years, and we were amazed by his jellyfish man of war costume.  He made it out of a an old umbrella, some fabric and paint, and it was wicked cool.  By Friday night though, we needed a break.  So instead of heading downtown to fight the tourist, we went to see a movie.  We saw In Time, which was a good movie but maybe not the best choice.

Key West is a magical place.  The nonstop party on Duval is a way of life and for most of us it is hard to imagine how they do it everyday.  But it is also a good reminder.  The party must go on.
Posted by Josh and Joe at 12:01 PM