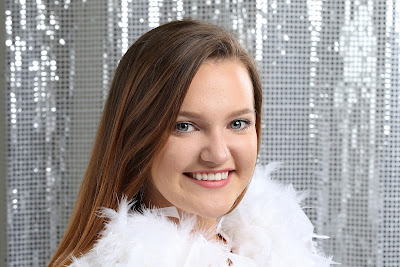 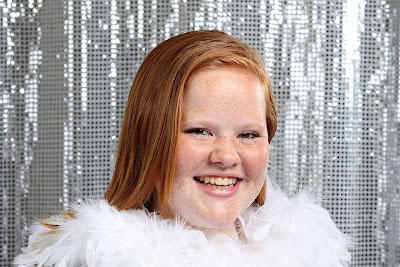 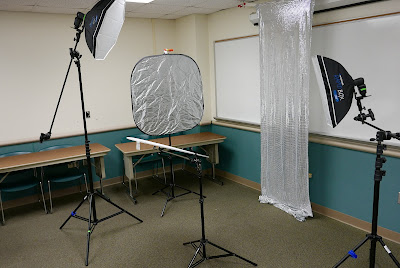 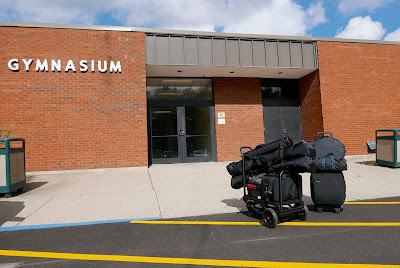 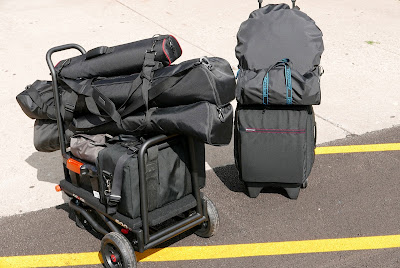 As the official photographers of the Georgetown Fair Queen Pageant one of our jobs every summer is to photograph the contestants. You see these pictures in the pageant program in in local newspapers leading up to the fair. This year we wanted to share a little behind the scenes of how we did the headshots for our friends out there who are curious about how we do photography for the Georgetown Fair Queen, and how we travel and set up on location in general.

This year we did the contestant headshots at Danville Area Community College in the Mary Miller building. We had hoped to do them at the fairgrounds main building, but when it got booked for an event, things got moved to the college. Above you can see pictures of our carts loaded up with our gear because we shoot in a classroom in the lower level, so part of our packing strategy is to make one trip through the building, down the elevator and into the room. On the cart is our lighting case which contains four speedlights, a small storage container with clamps and grip gear, two sandbags, two light stand bags and a tripod. On the rolling camera case are two Westcott Rapid Boxes and a Westcott reflector kit.

The lighting setup for the headshots were a pair of Westcott Rapid Boxes with two reflectors for fill. The setup shot above shows you everything, but we moved the main light, fill reflector and strip for the actual pictures. We used a Rapid Box 26" octa with a single speedlight for the main light, and a Rapid Box Strip with a single speedlight for the hair light. We used one reflector for bottom fill and another for side fill opposite the main light. The speedlights were Lumopro 180R's triggered with a Phottix Stratto II, and with any luck we'll do another post soon to tell you more about our gear and why we use it. 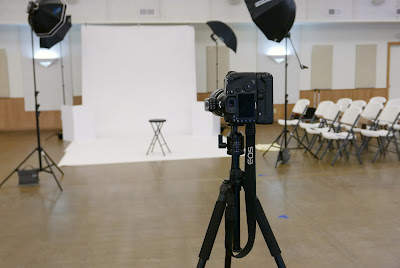 As the official photographers of the Georgetown Fair Queen in Georgetown, Illinois, we photograph the annual pageant and do most of the queen's official portraits and promotional images. Everything we shoot for the Georgetown Fair Queen is done on location in Illinois, which means we travel with a lot of gear and build out lighting sets for pretty much every "studio" picture you see of the queen. We do a lot of photography in the main building at the Georgetown fairgrounds, but we've set up on location all over the county. We've built out sets in a farm building with the help our good friend Queen Danielle and her family, and we've done production shoots outdoors in just about every park in the area. Basically: have lights, will travel.

For a production shoot it takes us about an hour to organize, pack and load out all the gear. When we shoot white seamless, which is one of our bigger setups, our car is just about a full as we can pack it. Travel time from door to door is about two hours. This means with travel time, load out, and load in, we are in for four hours before we even get started. Once on location, it takes us about two hours to get everything inside, unpacked and setup for white seamless. When we shoot the queen's official headshot and state portrait, we generally set up two or three sets in the fair building. In cases like this we try to have the sets ready to go for the queen so we can keep moving all day, but we do spend some time moving lights and reconfiguring setups throughout the day. We often rent extra stands and grip gear so we can build out the extra sets.

Because we shoot on location and try to travel as light as possible, we photograph the fair queen with speedlights. This might surprise a few of you, and it might surprise you even more to know that we routinely travel with six of them. With six speedlights, softboxes, umbrellas, grids and some of our favorite Kupo grip gear, so far these hasn't been much the fair queen has dreamed up that we haven't been able to deliver. Our style is to light, so we cling to our radio controlled flash units the way available light shooters cling to their fast lenses.

We hope these pictures give you a sneak peak behind the scenes of what it takes to photograph the Georgetown Fair Queen, and if you are a contestant this summer, we hope this gives you an idea of what you have in store for when you step in front of the camera with Josh and Joe Travels!
Posted by Josh and Joe at 11:55 AM