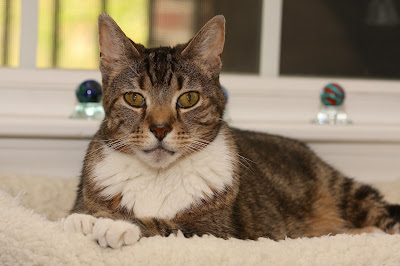 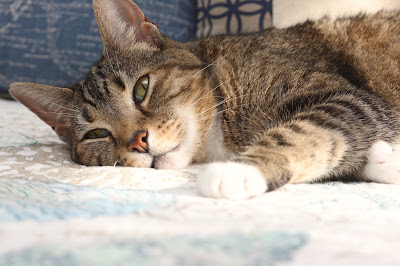 With roots in Florida and ties in the midwest, we do a lot of traveling, and many of our friends know we don't travel alone. Our cat Teak has spent a lot of time riding up and down the Florida turnpike, and getting to know Teak has taught us many important lessons.

Knowing Teak is a lesson in friendship. There are few things Teak enjoys more than the company of his friends, and he waits eagerly for companionship. Teak is emotional and intelligent about his relationships, and reminds us to spend time with the relationships that matter most.

Being Teak's friend is a lesson in honesty. Teak counts on us to help him with a lot of stuff, and he gives us no reason not to believe that he needs something. Teak has no use in his life for dishonesty or insincerity, because to honestly know Teak is to act with genuine kindness in your heart.

Teak, beloved cat and trusted friend, died April 12, 2016, following a six-month struggle with illness. He was twenty years old. Teak was treated for kidney dysfunction and chest congestion at Noah's Stop 11 Animal Hospital. He had also developed an unknown neurological condition that caused seizures in the sunset of his life. Affectionately known as Scooby to his close friends, Teak enjoyed seafood, bird watching and long naps in his window bed. He had become a "freshwater Conch," a term used in Key West, Florida, to describe northerners who become locals. Teak would change his call sign to the "Southernmost Cat" while in Key West, a reference to the nearby naval air station. He held a lifetime appointment as senior project supervisor and lead investigator of the household, and enjoyed relaxing with his favorite toys from a store at Clinton Square in old town Key West. A seasoned traveler, Teak had been as far south as Florida and as far west as Kansas, and he modestly preferred standard hotel rooms to suites. Teak is preceded in death by Kaya Anne, his longtime cat-panion. He is survived by Josh and Joe.

So one last time, Teak is changing his call sign. Teak is now and forever will be the Southernmost Cat. We had taken a break from blogging, but we plan to start posting again about our adventures. And if you happen to see us anytime soon along a blue highway, be sure to stop and ask if we need directions, because we suddenly find ourselves without our co-pilot here at Josh and Joe Travels.
Posted by Josh and Joe at 12:13 PM